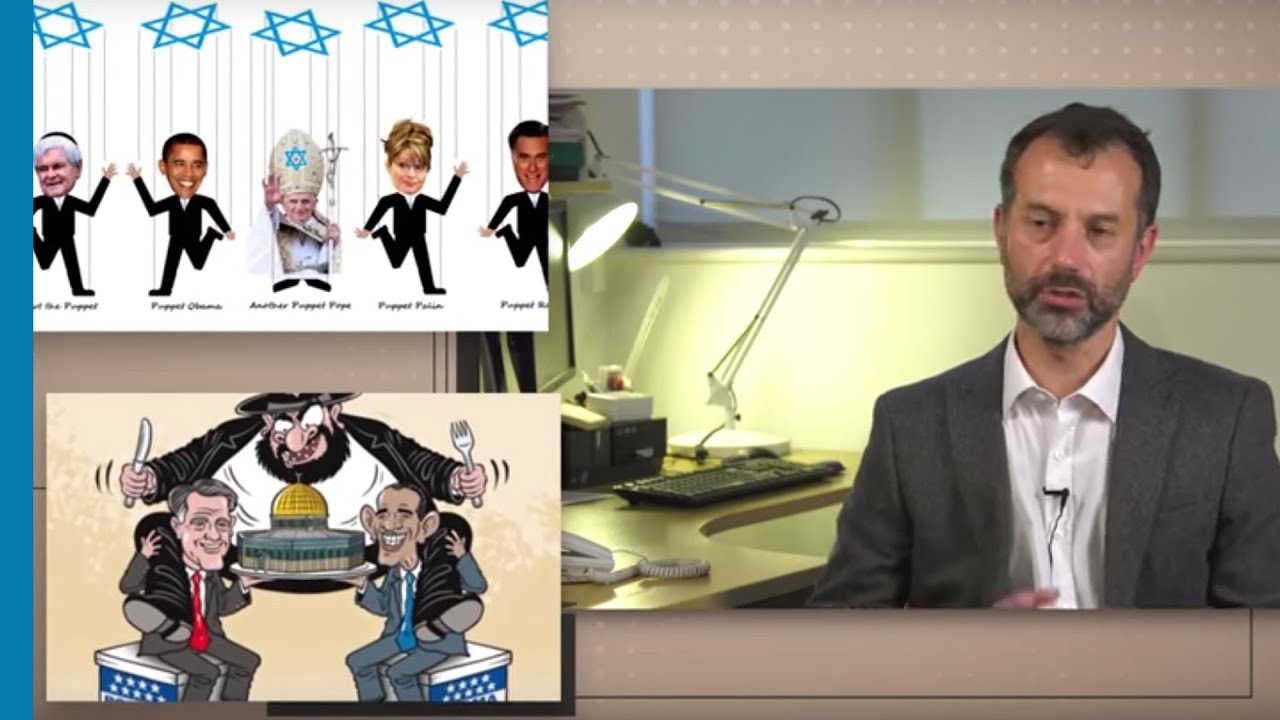 Conspiracy theories play a central role
in extremist politics of all type, and antisemitism has a very strong
traditional role within conspiracy theories, and this is why repeatedly we see antisemitism
cropping up in the language, in the discourse, of extremist
movements of all types – whether they are far-right, far-left, radical Islamist
movements, and even New Age movements, we often find antisemitic conspiracy
theories. There is a British think tank called demos, which has done a lot of
research on conspiracy theories, they looked at the the literature and the
arguments of a full range of extremist movements, and they found antisemitic
conspiracy theories cropping up in all their literature. The idea of ZOG – the
Zionist Occupation Government, that there are Zionists or Jewish hidden powers
behind our governments, was the most common one they found in the literature
of all different extremist movements, and there's reasons for this. Antisemitism was
the dominant type of conspiracy theory in that conspiracy world, pretty much
from the middle of the 19th century to the middle of the 20th century, so any
conspiracy theory that came out of that period, or that harks back to that
period from today, will inevitably bring antisemitism into it, and this has
been facilitated to a large extent by the growth of social media on the
Internet.

If you wanted to come across these antisemitic ideas 20 years ago
you would have to go and actually find an extremist movement, persuade them to
let you into their meetings, and these are not trusting people, get to read their
magazines, which would not really look like professional magazines or send off
to their book lists, and then you'd start to see these ideas. Ten years ago you
could find them on the Internet on extremist message boards, like Stormfront
and other far-right groups, but again it was people talking to like-minded people,
it was far-right people gathering together making
networks and connections, but not really reaching out of those boundaries.
Nowadays with social media these extremist ideas, these conspiracy
theories, this antisemitism is on all of our phones in all of our pockets in our
children's bedrooms and it looks as professional and as believable as
something from the BBC or from CNN, all you need is a Facebook page or a Twitter
account or an Instagram account and there it is.

So these ideas spread and what we're hearing from teachers in schools is that
increasingly their students are bringing in material that they found on the
Internet, that they do not have the critical powers to assess and to
challenge and to debunk, and increasingly teachers are having to argue against
conspiracy theories in the classroom. So this is a new problem, we hear a lot
about fake news nowadays, people talk about fake news and post-truth politics
all the time. Of course antisemitism is the original
fake news. Antisemitism has always relied on lies and libels and myths
about Jews, that unscrupulous political and religious leaders have used to
mobilize their own supporters or to whip up a mob. George Orwell, one of the great
British political writers, wrote a famous essay on antisemitism in 1945, where he wrote
words to the effect of one of the striking things about antisemitism
is that you have to be able to believe things that could not possibly be true.
So conspiracy theories, antisemitism, what is now being called fake news, they
all live together in a world and it's given a new lease of life to some quite
nasty antisemitic ideas.

Holocaust denial for example has really failed as
a political project, it's something that neo-Nazis tried 20-25 years ago to use
to revive National Socialism, no one bought it, but in the conspiracy world
where you're not supposed to believe any official story about anything, you
shouldn't believe anything that any establishment authority tells you,
Holocaust denial has a home, and it has a home alongside
conspiracy theories about 9/11 or about the 7th of July tube bombings here in
Britain or about the moon landings or about, you know Princess Diana's
death, and all these things just fit into this mix together, and the old barriers
between what is far-left and what is far-right, what is fascist and what is
anti-fascist, get completely blurred and broken down, because you get the same
conspiracy theories in all different parts of the political spectrum, and as
ever, as I said, when conspiracy theories are the main way of understanding
politics and of viewing the world, antisemitism will always have, not just
a place, but a central place.