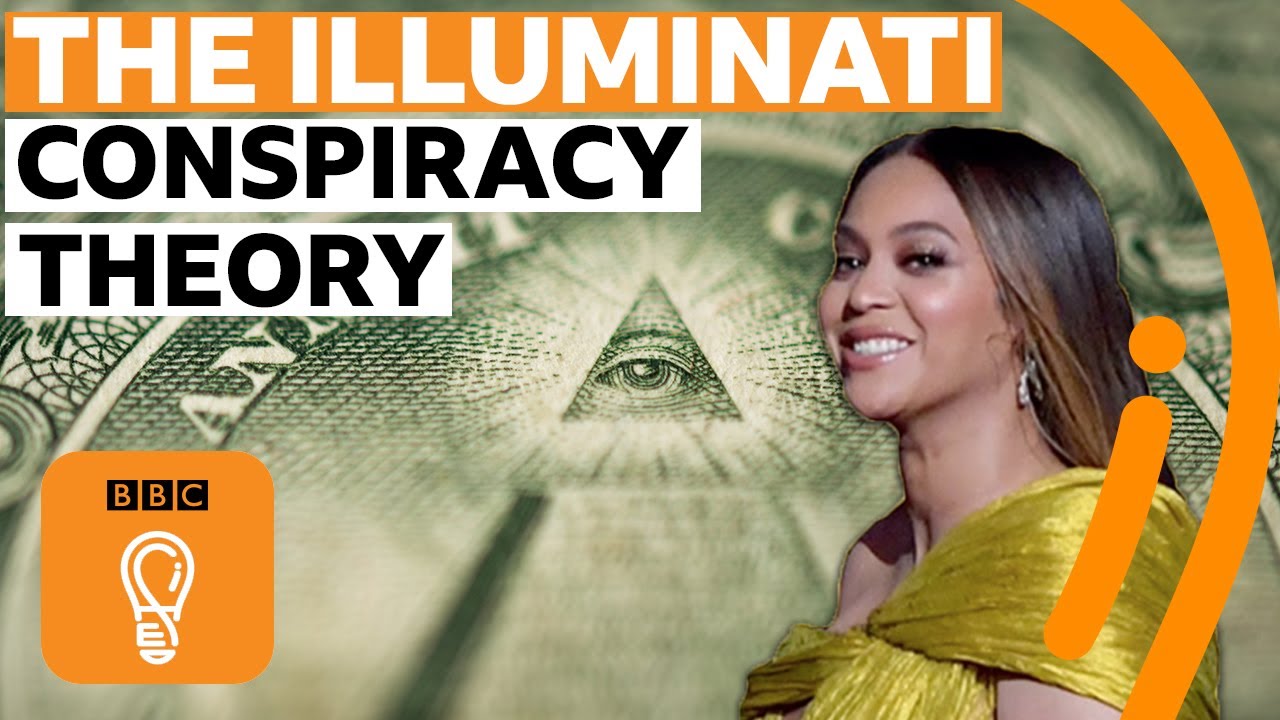 Is Jay-Z really in the Illuminati? Is Donald Trump? Is Katy Perry? Am I? Everyone from the BBC to Beyoncé has been accused of
being part of the Illuminati – a secret group said to comprise of
the world's most powerful people seeking to establish
a new world order. Even if you haven't
heard of the Illuminati, chances are you've probably seen one
of the symbols associated with them. Pentagrams, goats, even the all-seeing eye
that's found on US banknotes. References have also cropped up
in music videos, such as Rihanna's S&M, which featured a fake newspaper
with a headline declaring her… So why do musicians and artists like to play around
with references to the Illuminati? I think quite simply,
they're just having fun. They're just entertained by these
stories like many of us are. I'm reminded of a conspiracy
theory from 1966 that Paul McCartney of The Beatles
had died in a car crash on the way home after
doing some recording and he'd been replaced
by a Canadian DJ who looked a lot like him and quickly
learned to play the bass and sing.

Paul McCartney has never denied
this conspiracy theory. He's always kept quiet about it and I think McCartney,
like Jay-Z, Rihanna and others, is just entertained by the story. So who are the Illuminati? Are they really a shadowy elite
who control the world? The Illuminati were,
to the best of our knowledge, a Bavarian secret society
formed in the 18th Century. It opposed superstition, religious
influence and state authority. They even created a rule book
which stated that… The Bavarian group
eventually faded into irrelevance and has nothing to do with modern
concepts of the Illuminati. The conspiracy theory
that we know about today stems from the Discordian movement. The story goes that
Discordianism began in 1965 in the office of
a Texas drug attorney. Two schoolmates… …used the office photocopier
to publish copies of the Principia Discordia,
the movement's founding text. The book promoted the idea that… …and Discordianism gathered steam
throughout the 60s and 70s with Hill and Thornley
actively trying to cause mischief
and spread disinformation.

Their mission was expanded even
further by two other Americans – a writer called Robert Anton Wilson
and his friend Robert Shea. Wilson was editor at Playboy and the two of them decided
they would write a novel and they would throw all of the great
conspiracy theories into this novel and call it Illuminatus. And in fact, they enjoyed it so much
they turned it into a trilogy. They decided that it would
be fun to try and spread a little chaos and misinformation
deliberately about the Illuminati and they did this by writing letters
to the mainstream press, by writing letters to fanzines –
which were popular at the time – but also through the
letters page of Playboy itself. They would also write in letters
from imaginary readers saying that the Illuminati
weren't real at all or were kind of sitting on the fence.

It didn't really matter, what did
matter is that all these people seemed to be generating this
conversation about the Illuminati. And the idea was that you,
as the reader, were supposed to question that, interrogate it, ask,
"Are they really real?" The myth travelled far and wide. Wilson and Shea's
The Illuminatus Trilogy attributed some of the
mysteries of the time, such as, "Who shot John F.

Kennedy?"
to the Illuminati. Although the multitude
of conspiracy theories that appear in the trilogy
are imaginary, they're blended with enough truth
to make them seem plausible. Probably the oddest theory
was the suggestion that Adam Weishaupt, the founder
of the Bavarian Illuminati, assassinated George Washington
and assumed his identity {as President of the USA. Believers of this theory
point to Washington's portrait on the US one dollar bill which they suggest
is actually the face of Weishaupt. Despite its lack of mainstream sales
the trilogy became a cult favourite. It was even made into a mammoth
eight-hour stage play in Liverpool, launching the careers of British
actors Bill Nighy and Jim Broadbent. The 70s print magazine culture
seems distant now from our globalised
hyper-connected internet, but Illuminati rumours are still rife
on websites such as 4chan and Reddit where believers swap their favourite
versions of the conspiracy and champion evidence
to prove it's still in existence.

Ultimately it's not down to a shadowy
elite whether you choose to believe in the Illuminati
conspiracy theory or not. It's up to you. Thanks for watching. Don't forget to subscribe and click the bell to receive notifications for new videos. See you again soon!.