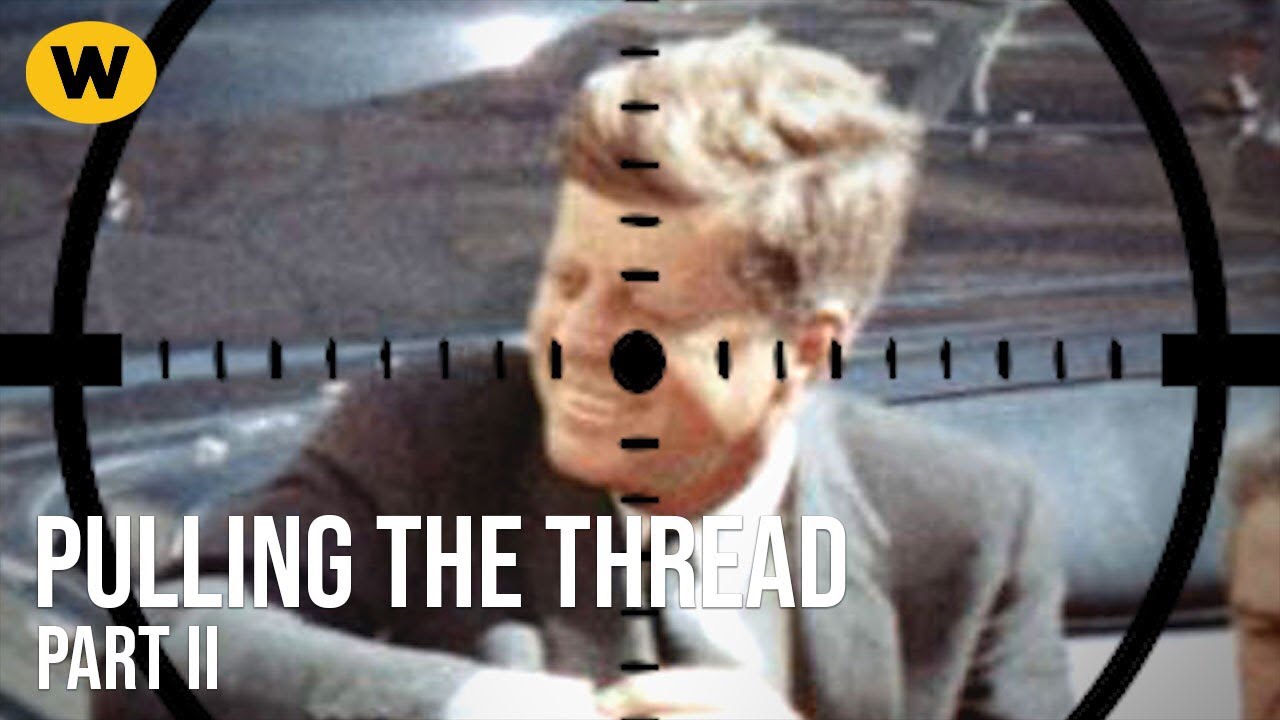 – There are a million
films that investigate whether the JFK assassination
was a conspiracy. This is not one of them. This is an investigation
into why so many people are still debating
the JFK assassination, more than 50 years later. The answers tell us a lot about why we believe
conspiracy theories, and anything else
for that matter. It turns out our
brains have evolved these fascinating
quirks that prime us for conspiracy thinking. All we need is the right set
of circumstances to set us off.

– President Kennedy died at
1pm Central Standard Time, some 38 minutes ago. – [Cara] In Episode One, we
learned that conspiracy theories can be tools for dealing
with loss and anxiety. And few events created a bigger
sense of loss for America than Kennedy's assassination. How could we possibly feel safe if our government couldn't
even protect its own president? – Every time the government
fails to predict an attack, there is a conspiracy theory.

Americans say how could
they have failed so badly? Perhaps they were
actually in on it. – [Cara] The JFK
assassination set off alarm bells in our
brains, Something just
didn't feel right. – That is intuitively
unsatisfying to say that a lone gunman who get
out of bed one day and change the
course of history, And so we go looking
for bigger explanations and a vast faceless,
old, powerful conspiracy that fits with our intuition, that such a big event
must have had a big cause. – Cognitive scientists have
a name for this intuition. They call it
proportionality bias, the tendency to believe
that a cause must be equal in magnitude to the effect. Most of the time small
efforts yield small results, and big efforts
yield big results. So our brains assume this
relationship holds true, even when it doesn't. – JFK, you know, the
leader of the free world is assassinated by who? Some lone nut never heard of.

Here's JFK, here's Oswald,
there's an imbalance there so you have to balance it. – [Cara] This man, James Fetzer, says there were no fewer than
six gunmen in Dealey Plaza. – Of the four shots that
hit JFK, the first was fired from the top of the
county records building, the second was fired for the
inside of the triple underpass, The third shot was fired
for the Dal-Tex, the fourth shot fired
from the intersection of the triple underpass
in the picket fence.

– Pretty soon Madison Square
Garden couldn't fit everybody that was involved
in the JFK case, but they kind of
balances it out. – [Cara] By contrast, let's
consider a different day, and a different lone gunman. – The president was
hit, shots were fired, apparently got President Reagan as he was coming out of the – The attempted assassination
of Ronald Reagan was a similar event
in all regards, except that the
president survived. It was a smaller event
in terms of its outcome, and therefore, we're satisfied
with smaller explanations. And so there have been
almost no conspiracy theories about the attempted
assassination of Ronald Reagan either at the
time or subsequently. – After proportionality bias primes us for
conspiracy thinking, another mental shortcut helps
us confirm our suspicions.

Once we form a belief we cling
to it no matter the facts. It's called confirmation bias. And study after study shows that we all experience
it all the time. In one study, people were
asked whether they thought the JFK assassination
was a conspiracy. Then they were shown a mix of
evidence both for and against both sides claim that
the same evidence confirmed their beliefs. Each side trusted the data
that supported their theory and discounted data that didn't. – Their minds operate more
like lawyers than scientists, and the point of lawyers
to defend your client to the best of your
ability even if that means distorting evidence, burying
evidence, slanting evidence.

– We evolved confirmation
bias for a good reason. Most of what was true
yesterday is still true today. And if we changed
our minds every time a new piece of
information came our way, our heads would explode. But in today's world
of alternative facts, it's a little too
easy to find evidence that confirms any hunch. The JFK assassination
has produced thousands of public
documents that can be scammed for confirming evidence, like this photo of the
presidential motorcade at the time of
the assassination. Here in the background
is the doorway to the Dallas Book Depository,
who is this blurry figure? Some say it looks an awful
lot like Lee Harvey Oswald, which would be significant
because at this moment, he should be six flights
up shooting the president. – Lee Oswald was framed,
we've even been able to prove that he was actually
standing in the doorway of the Book Depository. – But to a lot of
cognitive scientists, this connection shows another quirk in our brains
called patternicity.

– So patternicity
is the tendency to find meaningful
patterns in both meaningful and
meaningless noise. The reason for this
is that our brains are pattern seeking devices. – [Cara] And it took them
millions of years of evolution to get that way. – Imagine you're a hominid
3 million years ago, and you hear a
rustle in the grass. What is that? Is it just the wind? Or is it a dangerous predator? If you assume that pattern, that noise is a
dangerous predator, and turns out it's
just the wind, that's a low cost error to make. You just become more
vigilant and cautious. But if you assume that
the rustle in the grass is just a wind and turns out
it's a dangerous predator, congratulations, you're lunch. So it's a good thing to
assume patterns are real. – We oversee patterns
because it helped us survive when quick decisions
meant life or death. But it also leads
us to connect dots that aren't really connected.

I mean is this photo a clue to
cracking the JFK conspiracy? Or is it Billy Lovelady? A guy who was laying flooring
at the Book Depository that day in 1963. He and several
witnesses testified to
the Warren Commission that it was him in the photo. All of us, left, right,
street smart, and book smart, have the same cognitive
quirks baked into our brains just waiting for the
right set of circumstances to send us down the
conspiracy rabbit hole.

But there's one more element
any good conspiracy theory requires that doesn't
live in our brains. – The new President Lyndon
Johnson pointed a commission to investigate who
killed Kennedy. – When the
assassination happened, LBJ suspected people
would blame the Russians, and it would lead
to a nuclear war. So he tried to hurry
the inquiry through. And so when people feel
that it wasn't done entirely properly,
they're onto something. – That rushed investigation
planted the seeds of suspicion, then a few years later. – People have got to
know whether or not their president's a crook. Well I'm not a crook. – Watergate spurred a
number of investigations by the press, and Congress,
that then disclosed a whole lot of other real
government conspiracies. – [Cara] By the late 70s,
the percentage of Americans who believe JFK conspiracy
theories spiked at over 80%. In 2017, when the
government finally unsealed more classified JFK documents, It only made some
people more suspicious. – Some of this material's
still redacted. And you're not really seeing a meaningful effort on their
part to tell the truth. – Conspiracies happen and
governments keep secrets.

So how do we know
where to draw the line between being prudent
and being paranoid? More on that in
our next episode. – When you have your
grandfather telling you about growing up in
Mississippi or Alabama, and how the white
doctors did A, B and C, automatically in your brain,
you're going to be thinking like "I can't trust
these people.".