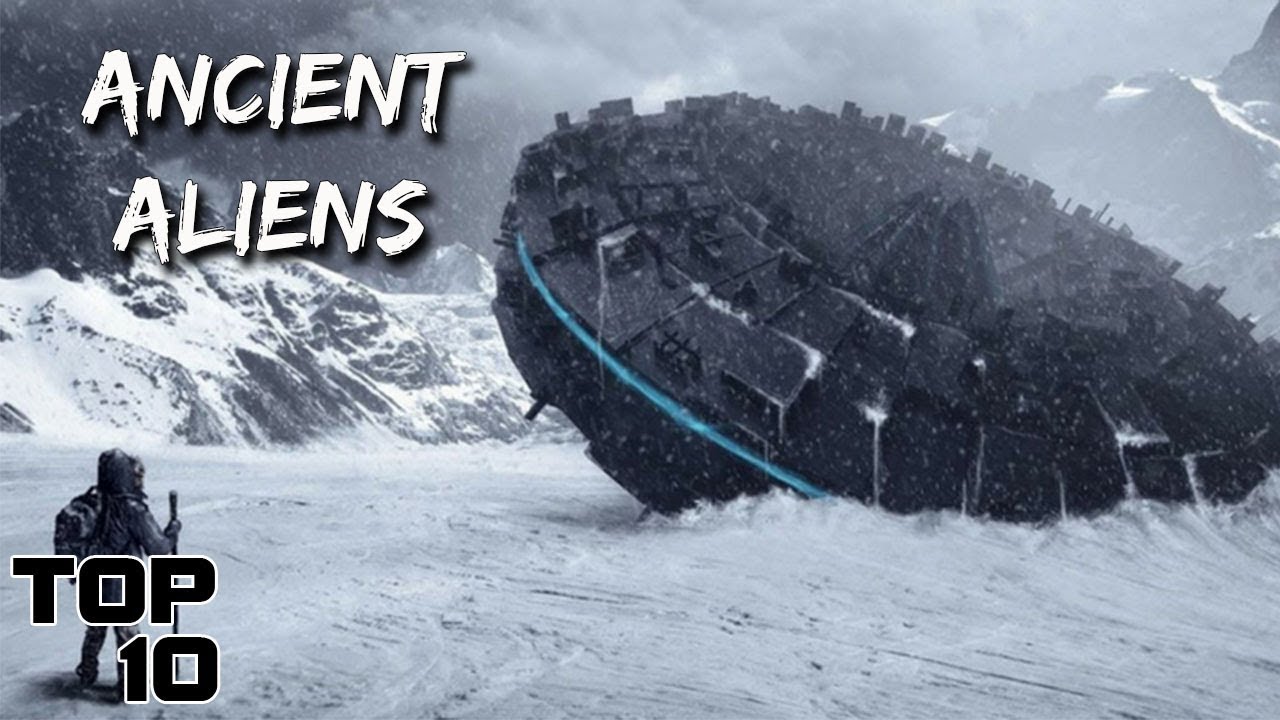 I think the coldest it gets here in Canada is negative. 30 degrees Celsius. Let me know in the comments section down below and while you are down there leave a thumbs up on this video and click that notification bell. So you never miss a trending video Also check out the links to our Instagram in the description box.

Now we have Aliens. Wherever there is a mysterious piece of land, someone will say that aliens have been there. Antarctica is one of those places. One of the more recent claims came in April 2017 when conspiracy theorists claimed to have found evidence of an underwater base off the coast of Antarctica. The 500m long object was spotted on Smyley island.

The first thing people usually say is that it looks like its just an iceberg that split away from the mainland. The UFO Sightings website disagrees, though they say the object does not fit in with the normal shapes of usual categories of iceberg. They said that the shapes and forms from this iceberg look very different when compared with icebergs. They believe that it could be a vessel in disguise. Next up at number 9, we have The Ice Wall.

Ahh flat earthers. Dont, they always have the best theories, A lot of Flat Earth critics raise the very fair question of what exactly happens when people sail or fly to the end of the earth and how we dont, you know, fall off The Flat Earth. Society believes that there is a massive 150 foot ice wall surrounding the coast of Antarctica. Not only is it tall, it is also thick. Several hundreds of metres thick to be precise, Flat earthers, often cite the explorer James Clark Ross. The British expeditions went to Antarctica in the mid 1800s

In his travel notes, he wrote of an icy wall, saying It was .

. an obstruction of such character as to leave, no doubt in my mind as to our future proceedings, for we might as well sail through the cliffs of Dover as to penetrate such a mass. Although of course, many historians and those who have actually read the full extent of his journals will know that he is talking about an ice shelf, the Ross Ice Shelf that was named after himalthough, this shelf is just 50 metres high and was 600 kilometres long until It recently broke apart.
To end this point about the ice wall, let me read one of my favourite quotes from the Flat Earth society Beyond the 150-foot Ice Wall is anyone’s. Guess,

How far the ice extends how it terminates and what exists beyond it are questions to which no present human experience can reply Apart.

Fromyou know humans who study science.humans with telescopes humans, who have been to space Forget about them.
Moving on to number 8, we have Atlantis [, b ]. For centuries people have been searching for Atlantis the lost island Plato wrote about in The Republic. It was the home of the Atlanteans, a technologically advanced civilization, who were said to possess almost mystical qualities beyond the average human.

Some people dismissed it as fictional, but others have become convinced that the island was real and that it was submerged under the water. Thousands of years ago, Theres a theory that Atlantis was not submerged, though, and that it is actually frozen in the ice of Antarctica.
In April 2018, the YouTube channel Conspiracy Depot shared a Google Earth image which shows a strange area in the Antarctic ice

The image shows a series of lines that, according to to the video, have an artificial origin and have recently been exposed due to melting ice in the area. They said the object is split into 3 parts that are all about 7m long. It seems too perfect to be formed.

Naturally, OK. Moving on now to number 7. We have Nazis [ c ]. I remember one video I did a while back where I discussed in detail the theory that the Nazi party survived World War 2 and and are currently living in a base on the dark side of the moon.
Yeah, that was an interesting theory, but so is this.

A lot of people think that this secret base was actually in Antarctica. They say that scientists in the 3rd Reich mapped out an area of rivers and caves across Antarctica. Then they discovered a large underground lake.

They decided this would be the perfect place for their secret base. They supposedly called it -Base, 22- or -New Berlin- for the conspiracy theorists, who believe all this.

They are now split between the ones who think the base is lost beneath the ice and the ones who think it is still home to a Nazi community all these years on Next up at number 6, we have The Bloop [ d, ]
You may have heard me mention this one before The Bloop was nickname, given to a strange, sound picked up by hydrophones across the Pacific in 1997. The hydrophones are essentially like giant microphones. They are positioned over 5,000km apart, so its not very often that they all pick up the same thing except this time. A number of them picked up the same loud ultra low frequency, sound across the pacific. Take a listen
Clip To many people that sounds like an animal, some sort of creature that made a noise so loud it was picked up across Earths biggest ocean

If such a creature did exist, it would be bigger than anything weve ever seen, thats the only way it could make a sound that loud Well, scientists said this is not true and that the sound was actually caused by icequakes in the Antarctic, its the sound of Ice breaking up and cracking and the sound was picked up as The Bloop Others arent buying it and say that the sound may have come from Antarctica, but it was definitely biological.

Moving on to number 5, we have Hollow Earth.

As you can probably guess from the name, it proposes that the planet is entirely hollow on the inside, that we all live on a shell that is 500 miles thick, which is only a fraction of the way to the centre of the Earth. So where does Antarctica come into this? Well?

In December 2016, a study was published indicating that there seems to be a massive anomaly underneath the ice of Antarctica. Some researchers believed it to be the remains of a truly massive asteroid. That is more than twice the size of the one that wiped out the dinosaurs

Another theory is that is, could be the portal or entrance to the Hollow Earth. I also read an article about Russian scientists drilling down through the ice in Antarctica. Hopefully they don’t pierce through to space.

Inside Moving on to number 4, we have Area 51, [, f, ], It doesnt matter. What kind of video I do about conspiracy theories Area 51 will always crop up even in Antarctica. In March 2018, news articles began circulating about Arrival Heights, a secret laboratory located deep in the mountains of Antarctica. That is called Area 51. That kinda makes you think of how many secret bases theyve made between 51 and 122
I guess the answer is 71 Yeah Journalists from New Zealand investigated the lab and found that it was filled with old technology.

It was very strange Like something out of a movie
The computers had floppy drives, there was a huge computer called the Dobson spectrometer, which had a periscope sticking up out of the roof.

So what is it all for? Well, they say its to study the hole in the ozone layer above the continent. The old equipment is so sensitive that even breath, or speaking too loudly is said to damage it. Some people say that the base is hiding more secrets and that Area 122 could be the new Area.

51.
Moving on to number 3, we have The Pyramids [ g ]. In 2013, an article on Scienceray Com claimed that three ancient pyramids had been discovered in the Antarctic by a team of American and European scientists.

Relatively little is known about the pyramids, and the team behind their discovery has remained silent ever since One piece of information that emerged was that they were planning an expedition to the pyramids, to research them properly and determine if they were natural or man made.
If theyre natural, they could simply be the product of erosion or tectonic activity btu.

If theyre man made that would open up the suggestion of ancient civilizations, We know of only a handful of civilizations that built pyramids as big as the ones discovered in Antarctica, most notably the Aztecs and the Ancient Egyptians Conspiracy. Theorists are already jumping on board with the Antarctica Pyramids as proof of a lost pyramids building civilization. Next up at number 2, we have The Big Melt: [ h, ]

As Im sure youre aware, Antarctica is covered in a sheet of ice at some points, its 3 miles thick And, as Im sure youve. Seen on the news. The ice caps are melting.

When you see those images of glaciers, drifting out into the ocean, its natural to think what, if it all, goes Well, that would be a disaster. Some estimates state that, if all the ice on the Antarctica sheet were to melt sea levels would rise by 200ft To give you an idea of what this would do, the entire east coast of the US would be underwater and Florida would vanish. It would be almost entirely underwater

Another scary aspect of all this is that we don’t know how much or how quickly this could happen, or even what it would look like.
Climate scientists still have a lot to understand when it comes to this process, but their worst case scenarios paints a pretty grim picture And finally, at number 1 we have Ancient Diseases [, i ]. As we know, Antarctica is pretty cold, So cold land is buried under two kilometres of ice Recently in Siberia.

In part of the arctic circle, nomadic tribes were effected by an outbreak of anthrax that came as a result of permafrost melting, an unleashing, an ancient strain. A 12 year old boy died and thousands of reindeer became infected.
Obviously, there are many reasons to be worried about the ice caps melting, but it seems that ancient diseases could be trapped under the ice that modern day humans and animals have no resistance to. As the ice is so thick. We literally cannot know what is under there and what might be lurking.

It seems that permafrost provides the perfect conditions for bacteria to remain alive dormant for millions of years. Scientists are worried that a pandoras box of illnesses we dont know how to cure are out there waiting to emerge one day.