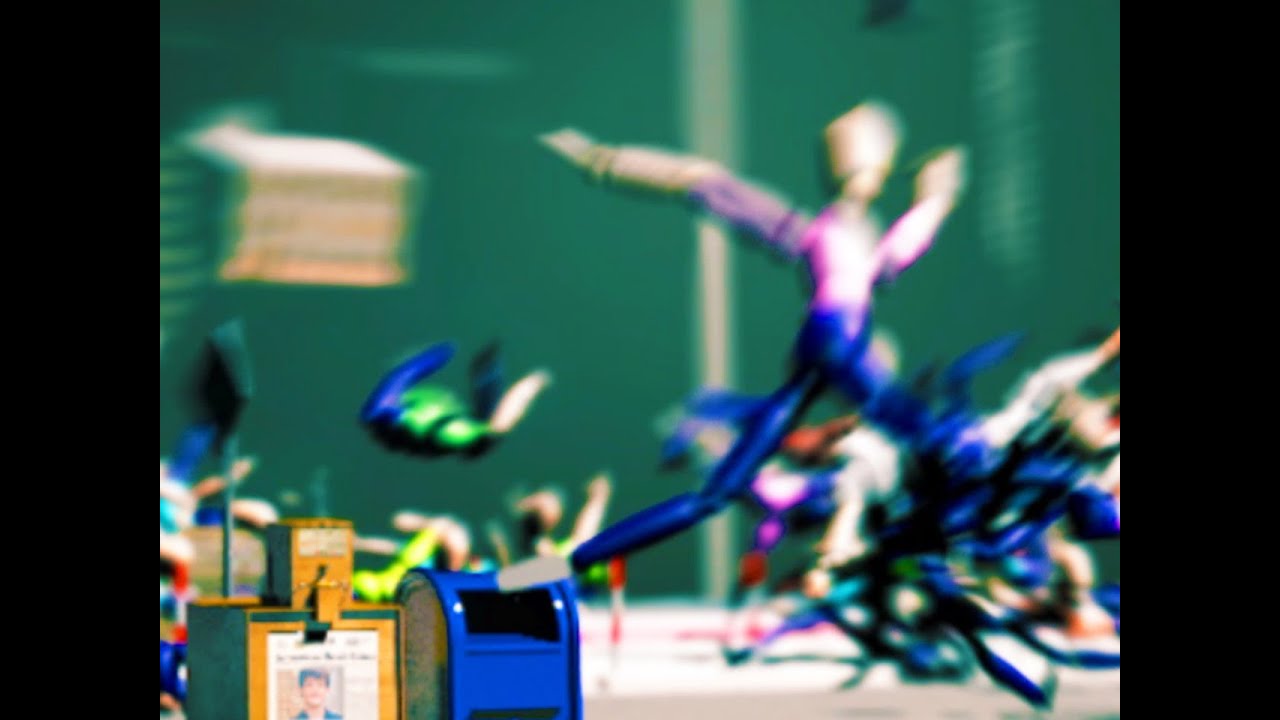 Hey, Vsauce. Michael here. The Earth is spinning and we are spinning along with
it. But what if the Earth suddenly stopped spinning?
Well, first of all, you would gain weight. But that would be the least of your worries. The spin of our planet is important and literally giving you the time of your life. At the equator, the surface of Earth, and everything on it, is spinning around at
465 meters per second. As you move closer to the poles you
don't have to move as quickly to complete Earths daily rotation.

Here in San Francisco, the Earth is driving me east at 368 meters per second.
If I could float above the surface independent of the Earth's rotation, the
Earth would spin underneath me this quickly. Pretty cool. But, of course,
when I jump straight up into the air, the Earth doesn't move underneath me
because I continued to spin with it. We are all spinning with the Earth and
that is why slamming on a set of magical planetary breaks that caused
everything classically called earth to stop
spinning would be catastrophic.

Immediately everything that wasn't Earth, and wasn't safely at the poles,
would continue moving, as it had been, and be flung due east at more than a
thousand miles an hour. You wouldn't be flung into space because
escape velocity is 24,800 mph but your body would instantly become a 9.5 inch caliber bullet. Well, really more of a supersonic tumbleweed. Because the atmosphere would more
gradually slow down, people in airplanes, assuming they could navigate the
resulting storms, might have a better chance of surviving. Astronauts aboard the ISS would fare even better. But it is unlikely that anyone would be waiting for them down on the ground. Runways would just be entrances to the new planet-sized graveyard, created by the no longer spinning Earth.

People really really near the poles
might be okay but only at first. Gusts of wind, as fast as
those near an atomic bomb detonation, would blast, pass the surface and up into the
sky forming worldwide storms of unprecedented magnitude. The friction alone, caused by the now stopped Earth colliding
with these winds, would be enough to cause massive fires, unparalleled erosion and damage to
anything strong enough to stay put after the initial braking. The Sun would
seem to freeze in the sky as days became not 24 hours long but 365 days long. Without spinning innards, Earth's
protective magnetic field would cease to exist and we would be dosed with deadly
amounts of ionising radiation from the Sun. The oceans would surge onto land in
tsunamis kilometers high and wash over nearly all dry land, before migrating to the poles, where gravity is stronger, no longer held to
the ocean basins by the inertia Earth's spin gave them, until Earth itself, no longer bulging an extra 42
kilometers around its equator, because of its rotation slowly compressed into a more perfect sphere than it is now.

Possibly allowing the
oceans to eventually return somewhat. That is what would occur if it actually happened.
It won't actually happen but woah, its rotation is slowing down. More on that later. First, if the Earth
really is spinning so quickly, why can't we feel it? Why doesn't the Earth's rotation make us dizzy? Well, lucky for us, the change in velocity is just too
gradual. The Earth is too huge. It's like driving in a car that takes 6 hours and six thousand miles to make
one left turn. It's not sudden enough to
register with our senses. But that change in velocity is real and it makes us way less, because of inertia. On our spinning
planet your velocity is constantly changing but always tangential to the circular path you were
being dragged along. Now, because inertia is a property of
matter, which includes your body, without a force acting upon us we would slowly leave the surface of Earth. Luckily, the Earth is exerting a force on us.
A center-seeking, centripetal force, delivered by gravity.

The centripetal force required to keep
you along a circular path with Earth is subtracted from Earth's total gravitational pull on you. The remaining force simply pushes you down, toward the centre of the Earth – it gives you weight. At the equator, if the Earth didn't spin,
and no centripetal force was required to keep you with the Earth, you would weigh 0.3 percent more than you currently do. If Earth spun you around 17 times faster than it currently does,
all of its gravitational force would go toward centripetal force
fighting against your inertia and you would be weightless.

So here's a diet idea. Hope that the Earth starts spinning faster and go back for guilt-free seconds. Seconds. We know exactly how long a second is. The outermost electron of an atom of cesium 133 is alone. When the atom is undisturbed, only the nucleus interacts with this outermost electron, tickling it regularly and rapidly between two levels. After 9,192,631,770 oscillations between those two levels,
one second has passed. Exactly. That is literally the definition of a second. We can measure and count those oscillations. It's how atomic clocks work. Making atomic clocks, the most accurate measurement device
ever built by humans, to measure anything. We can't define a second more simply, as say, 1/60th of 1/60th of 1/24th of a day because of Earth's spin. It's too irregular. Little changes in the distribution of mass on Earth,
caused by earthquakes or melting ice or man-made dams or technically even you walking up stairs or downstairs, cause Earth's rotational speed to change. Like a figure skater moving their arms
further away from or closer to their bodies. Now add on top of that the fact that tides, caused by the Moon, drag against Earth's rotation and you
wind up with an unstable rotation speed that is predominately slowing down.

Now, these changes are incredibly incredibly
slight, but over time they add up. In 140 million years, a day on earth will not be 24 hours long, it will be 25. That might not sound like much but in order to do important things, like
deliver accurate GPS information, we need a more accurate timekeeping device than that. So, as a solution scientists keep the pace of seconds
using atomic clocks, TAI time. And other scientists measure the changing speed of Earth's
rotation by observing distant stars and quasars. Now, every few months they
find out just how behind or ahead Earth is running, and if it's getting too
close to being a second off, they decide to add or subtract the
second from the current year. The result is the time used almost everywhere, including your phone: UTC. Since this system began in 1972 25 leap seconds have been added. What this means is that clock time is, and has to be, a manufactured product with upgrades and tune ups administered periodically, after defects are noticed. The time we give to now and the future is only ever approximate. That's weird but it's also entirely not weird.

As Demetrios Matsakis, the Chief
Scientist of Time Services for the US Naval Observatory puts it, "we save lives and we end lives. We add time and we
can take time away, but in both cases we do so
without completely understanding exactly what life is, or what time is." Regardless, thank you for spending some
of yours with me… and as always, thanks for watching..