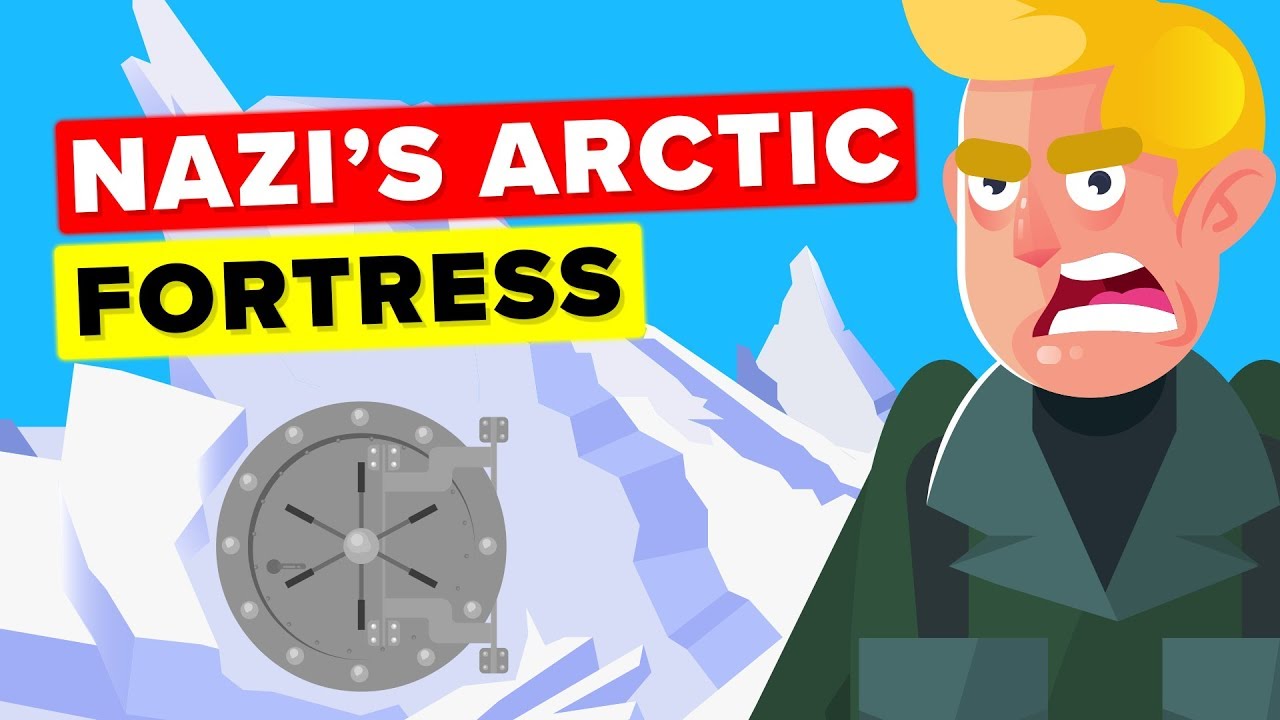 During World War II, allied ships and aircraft operating in the north sea often picked up mysterious signals that seemed to be coming from somewhere far to the north, With war raging across europe, though, and no vital allied interests anywhere near the arctic, the signals were disregarded as A curiosity and generally ignored, However, while the allies were ignoring these mysterious signals, it was the Nazis themselves who were sending them all from a secret installation deep in the Arctic and just north of Russia. Was this a Nazi super villain base in the Arctic? A thousand miles shy of the north pole and only a few hundred miles from Russian territory. Scientists from the Russian Arctic National Park unearthed the remains of a secret base on a remote island, known as Alexandra Land Spotted from the air in 1947, but not reached by the Soviets until 1952. A 2016 archaeological investigation made possible by unseasonably warm weather has yielded hundreds of items that detailed the lives of the German scientists who worked there.

Amongst the items discovered were German mines, hand, grenade, fragments, cartridge boxes, ammunition, uniforms, coats and sacks bearing the label of the Wehrmacht or German army, But just what in the world were the Germans doing so far, north and so perilously deep in Soviet territory, Predicting the weather? Has been vital for militaries since antiquity During the famous Battle of Thermopylae in ancient Greece, the Persian invaders and their superior fleet were absolutely devastated by surprise storms, sending hundreds of ships and thousands of men to the bottom of the Aegean Sea When the Mongols sent an Invasion force of tens of thousands of warriors to Japan, a storm once more devastated the invasion fleet and foiled. The planned attack
A second invasion attempt would meet with the same fate and by then so many men and materials had been lost, that any invasion was canceled forever. Clearly, weather and understanding. It is critical for military success.

Yet it wasn’t until the advent of radio and modern meteorology that we began to understand it or how to predict it. The Germans knew that forecasting the weather in the north seas would be critical in their fight against England’s superior fleets and just as important for their mighty Luftwaffe, which would be useless during bad weather.

Understanding how weather systems worked and predicting them could give Germany a critical advantage in the war and allow their bombers to strike enemy targets without fear of running into storms, which would ruin the accuracy of their bombing runs. To this end, Germany set up a secret weather research station, one thousand miles south of the North Pole on an island known as Alexandra Land.
Weather stations were not anything new, but they were still very high priority targets that were often destroyed by ships or by aircraft Denying the enemy the ability to forecast the weather was as critical as scoring direct military victories, and so any enemy weather stations were high.

On the list of targets for both sides during the war, This station in Alexandra Land, however, would prove to be even more dangerous than normal for the Germans to operate, as it would be based only a few hundred miles from Soviet Territory and well out of range Of the German navy or air forces, The men would be completely on their own and relied on extreme secrecy to ensure their survival. To that end, the construction, crews and the men who would operate the station were all delivered via U-boat slinking past Allied ships by diving. Underneath them

The plan worked perfectly and it wouldn’t be until two years after the war that anyone would discover the secret base From their base in Alexandra Land. The Germans were able to monitor arctic weather patterns and conduct atmospheric research, which would be vital in understanding how weather actually worked. The remains of the base included pieces of weather balloons, thermometers, astronomic tables and journals full of meteorological data.

Over seven hundred weather reports were sent via radio back to Germany from the base, and it was never once discovered. Meanwhile, the vital data allowed the Nazi war machine to avoid bad weather or exploit imminent breaks in ongoing storms.

Ultimately, though, the station would have to be abandoned in 1944 after the inhabitants ate tainted polar bear, meat, The bear had been contaminated with roundworm likely getting the infection itself from a seal, and it made the men ill enough to force an evacuation via U-boat With the War going so poorly for Germany, the station was never re-manned again Yet rumors of other secret Nazi bases have persisted to this day, most famously the claim that they built and operated a base in Antarctica-. Some sources claim that Nazis remain in their secret Antarctic base. To this day, plotting their icy-cold revenge upon the world that forgot them.

Probably with giant robots or something
These rumors, however, are exactly that just rumors, but born from a very real expedition that had actual plans to build a base in Antarctica- and for reasons you will never guess At first thought. You might think that the Germans would build a base in Antarctica to allow them to research and develop super secret ultimate weapons, deadly biological plagues or perhaps to make direct contact with C’thulu and his Elder Things which remain to this day asleep deep beneath the Antarctic ice

The reality, however, is far weirder, because Hitler wanted a base in Antarctica for one reason and one reason, only margarine, Widely known as the crappier substitute to butter. Margarine was incredibly important for Germany, as the German people absolutely loved the stuff. Yet one of the main ingredients for margarine and many other oil and fat-based products was whale oil which Germany had to purchase from Norway.
In the case of war, Hitler knew that Norway would probably be pretty reluctant about conducting trade with Germany, and even if it still did want to trade, the Allies would very easily blockade his ports and block the import of all-important whale oil.

Hitler needed a substitute source of whale oil and he needed it before he went to war By the 1930s, though commercial whaling in the north atlantic and north pacific had decimated whale populations, so Hitler ordered the construction of factory whaling, ships that would hunt in the distant Southern waters Operating so far from home, the German whalers needed a base of operations to conduct, repairs and to rest their crews. So Hitler decided that he would claim part of Antarctica for himself. In August of 1936, the German Foreign Office found some unclaimed territory in Antarctica between Norwegian and British Zones and organized an expedition to explore the region and claim it
By the summer of 1938, Captain Alfred Ritscher a decorated World War, I commander was selected to lead the expedition-, though only grudgingly, as he had married, a well known Jewish artist and was not a member of the Nazi party.

Still, the Captain was one of the most experienced polar navigators in Germany and, in the end, was granted command For three months. The Captain’s ship the Schwabenland underwent extensive retrofits to turn it into an icebreaker and Ritscher at last sailed from Hamburg on December 17th, 1938.

With a crew of 82 scientists officers and enlisted men, The ship was also equipped with a catapult for two Dornier flying boats and a crane to recover them from the sea. Upon return, A month later, the ship reached the Antarctic coast line and the flying boats were sent to conduct aerial reconnaissance
This very mountainous region had never before been explored and the German scientists named it New-Schwabenland after their ship. However, the expedition wasn’t free of troubles and during one flight the crew ran low on fuel and were forced to toss out every pound of equipment they could in order to lighten the aircraft. This included boxes of tiny metal swastikas, which they were supposed to have dropped across the claimed land in order to cement the German claim to it.

To this day, the tiny swastikas remain strewn across the Antarctic landscape, where they have likely murdered a very unsuspecting and utterly surprised, penguin or two More proof that the Nazis really were monsters.

The expedition ended up surveying an area larger than Germany and on February 5th 1939 the expedition sailed home, confident that Germany could claim the land and build a whaling station there On the way home. The ship even conducted scans of the ocean floor and discovered seismic activity that ran from north to south along the middle of the Atlantic-. These would later be found to be lines of volcanoes, known as the Mid-Atlantic Ridge, which make up a region where two of the Earth’s tectonic plates meet This early discovery wouldn’t cement our modern understanding of plate tectonics until the 1950s, which goes to show that, if the Nazis had been less warmongering and mass-murdering super villains. They might have led the way in scientific discovery.

Ultimately, the whaling station was never meant to be, as Germany decided to start World War II and destroy itself in the process That doesn’t stop the rumor mill from generating ever-evolving stories about secret bases.

In Antarctica, though, and while entertaining about all the evil the Nazis did. In this most remote of continents is murder, an unsuspecting penguin or two with free-falling boxes of swastikas
Or perhaps that’s just what we would say if the Nazis did establish a secret base, thousands of miles from the nearest civilization and struck up an alliance with C’thulu and the Elder Things after freeing them from their icy prisons and now plot their revenge on an unsuspecting World, What secret Nazi bases have you heard about? Are the poets turning mad as they herald C’thulu’s million year reign of darkness, and madness Also check out our other video? What If Hitler Had Won?