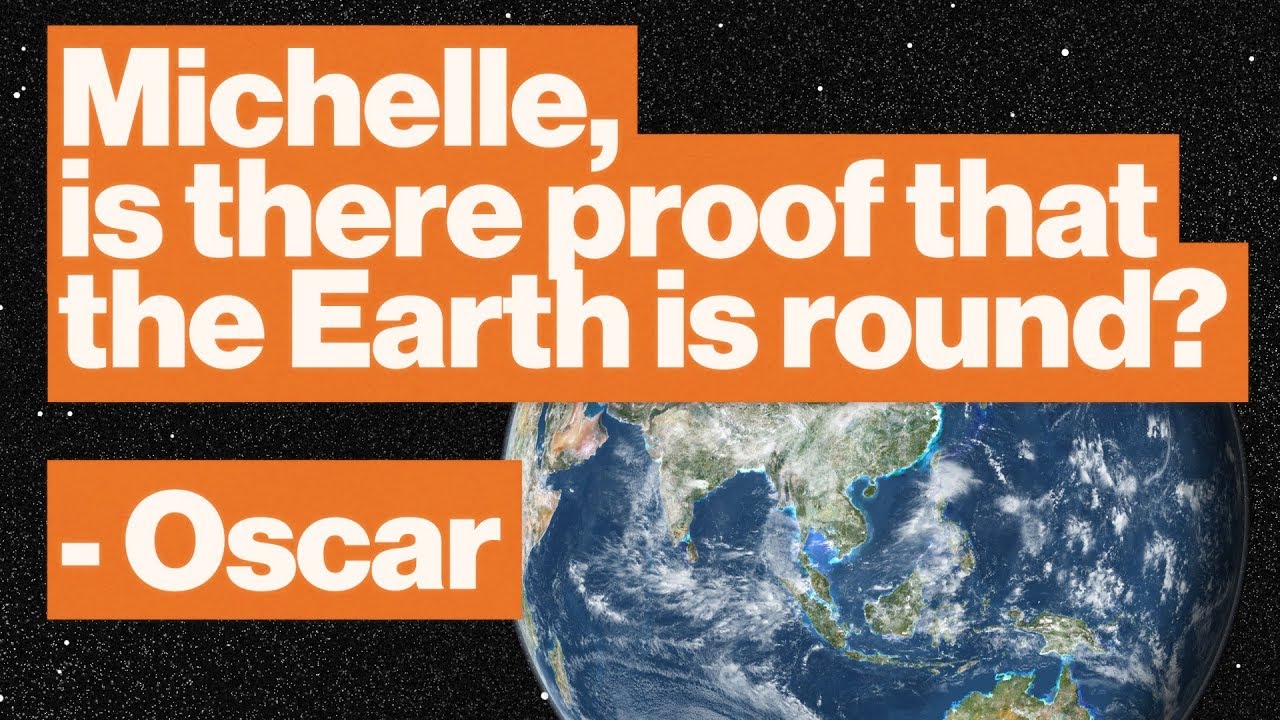 Dr. Michelle Thaller is an astronomer who studies binary stars and the life cycles of stars. She is Assistant Director of Science Communication at NASA. She went to college at Harvard University, completed a post-doctoral research fellowship at the California Institute of Technology (Caltech) in Pasadena, Calif. then started working for the Jet Propulsion Laboratory’s (JPL) Spitzer Space Telescope. After a hugely successful mission, she moved on to NASA’s Goddard Space Flight Center (GSFC), in the Washington D.C. area. In her off-hours often puts on about 30lbs of Elizabethan garb and performs intricate Renaissance dances. For more information, visit
NASA.
———————————————————————————-
TRANSCRIPT:

MICHELLE THALLER: So, Oscar, you asked the question, “What are some of the easiest ways that you can prove that the Earth is round?” Because apparently, this is something that we’re debating—I have no idea why.

That’s a hard thing for me to even start talking about because there are so many proofs that the Earth is round, it’s difficult to know where to start. And it’s not okay to think that the Earth is flat. This is not a viable argument.

I have friends who have been on the International Space Station, they have orbited the Earth once every 90 minutes; I’ve had personal experience with people who have been up in space and can see with their own eyes that the Earth is round. And of course, we’ve taken all of these amazing pictures from space; they’re so beautiful, all those pictures of the Earth.

So I don’t really know what’s going on right now with this ‘Earth is flat’ thing, but I will tell you that this is one of the things I really enjoyed teaching my own astronomy class about because there are proofs all around you. It is not difficult to know that the Earth is round. In fact, people have known of this for way more than 2,000 years. The ancient Greeks actually had a number of really elegant, wonderful proofs that the earth was a sphere.

So let’s start from the simple to the slightly more complicated. One of the things you can see yourself, with a pair of binoculars, is if you actually go out to a lake and there are boats on that lake, the farther away a boat is the more the bottom of the boat will disappear, and you’ll basically just see the mast of the boat. And as a boat goes farther and farther away the last thing you will see is the very top of the mast of that boat, and that’s because the boat is actually going over the horizon that’s curved—and that means that as it goes farther and farther away you see less and less of the bottom of it, and more of the top of that. You can see that with binoculars by an ocean, by a lake, it’s really easy. That wouldn’t happen if the Earth were flat—you would simply see the boat getting smaller and smaller and smaller as it went farther away, but you’d be able to see the whole thing with the same proportions.

Now, another way that you can tell that we’re on a sphere is to think about how there’s something called the tropics on the Earth, and the tropics are places near the equator of the earth were sometimes the sun is overhead in the sky. This was actually something that the Greeks used, not only to prove that the Earth was round about 2000 years ago, but they actually measured the circumference of the Earth, accurate to within just a couple percent. 2,000 years ago we’ve known that the Earth was round.

There was a really brilliant Greek scientist called Eratosthenes, and Eratosthenes noticed that there was a town called Syene, and on a certain date the sun would actually shine straight down to the bottom of a well. That mea…

For the full transcript, check out